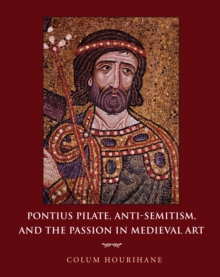 Pontius Pilate, anti-semitism, and the Passion in medieval art

Pontius Pilate is one of the Bible's best-known villains--but up until the tenth century, artistic imagery appears to have consistently portrayed him as a benevolent Christian and holy symbol of baptism.

For the first time, Pontius Pilate, Anti-Semitism, and the Passion in Medieval Art provides a complete look at the shifting visual and textual representations of Pilate throughout early Christian and medieval art.

Colum Hourihane examines neglected and sometimes sympathetic portrayals, and shows how negative characterizations of Pilate, which were developed for political and religious purposes, reveal the anti-Semitism of the medieval period.

Hourihane indicates that in some artistic renderings, Pilate may have been a symbol of good, and in many, a figure of jurisprudence.

Eastern traditions treated Pilate as a saint with his own feast day, but Western accounts from the tenth century changed him from a Roman to a Jew.

Pilate became a vessel for anti-Semitism--his image acquired grotesque facial and physical characteristics, and his role in Christ's Passion grew to mythic proportions. By the fifteenth century, however, representations of Pilate came full circle to depict an aged and empathetic administrator.

Combining a wealth of previously unpublished sources with explorations of art historical developments, Pontius Pilate, Anti-Semitism, and the Passion in Medieval Art puts forth for the first time an encyclopedic portrait of a complex legend.