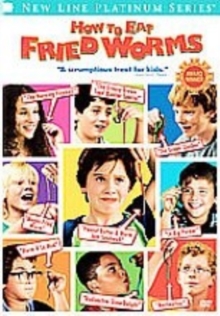 How to Eat Fried Worms

Family comedy based on the popular children's book by Thomas Rockwell.

Billy (Luke Benward) is an 11-year-old boy whose folks have just moved to a new town and is facing the terror of his first day at a new school.

It doesn't take long for Billy to run afoul of Joe (Adam Hicks), the school bully, who finds the live bait Billy brought with him and throws it in his face, asking Billy if he eats worms for lunch.

Billy tries to gross out Joe by saying yes, he eats worms on a regular basis, and Joe calls his bluff by challenging him to eat ten worms in front of the student body.

Billy takes the bet, and suddenly becomes something of a celebrity at school as the first kid to stand up to Joe.

Billy also discovers he's caught the eye of Erika (Hallie Kate Eisenberg), a cute girl in his class, but can he actually eat the worms without losing his lunch?

With the help of a handful of new friends, Billy prepares for the big contest by learning how to eat as much gross stuff as he can, and he gains an unexpected ally in hot-headed Principal Burdock (James Rebhorn).