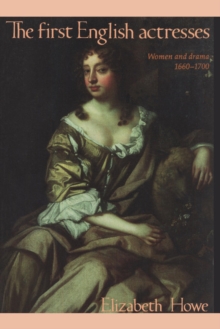 Before the Restoration of Charles II there were no professional actresses on the English stage, and female roles had almost always been played by men.

This book describes how and why women were permitted to act on the public stage after 1660, and the consequences of their arrival for the drama of the period.

Elizabeth Howe opens up a fascinating subject to non-specialists.

Beginning with a general account of the workings of Restoration theatre, she goes on to explain the advent of the actresses and how they were treated.

Perceived predominantly as sex objects, the actresses' sexuality was variously exploited in ways that had important consequences for drama.

The book addresses questions that are relevant to women's issues in every period: how far did the advent of real women players alter dramatic portrayals of women?

Did this encourage more or less equality between the sexes?

Although in one sense merely playthings for a small male elite, the pioneering actresses also represent a distinct female voice in society and a fresh place in discourse.