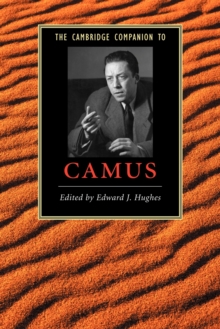 The Cambridge companion to Camus

By: Hughes, Edward J. (Queen Mary University of London)(Edited by)

Albert Camus is one of the iconic figures of twentieth-century French literature, one of France's most widely read modern literary authors and one of the youngest winners of the Nobel Prize for Literature.

As the author of L'Etranger and the architect of the notion of 'the Absurd' in the 1940s, he shot to prominence in France and beyond.

His work nevertheless attracted hostility as well as acclaim and he was increasingly drawn into bitter political controversies, especially the issue of France's place and role in the country of his birth, Algeria.

Most recently, postcolonial studies have identified in his writings a set of preoccupations ripe for revisitation.

Situating Camus in his cultural and historical context, this Companion explores his best-selling novels, his ambiguous engagement with philosophy, his theatre, his increasingly high-profile work as a journalist and his reflection on ethical and political questions that continue to concern readers today.