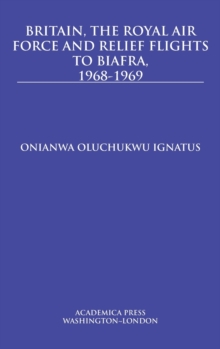 The main area badly ravaged by the conflict being the Republic of Biafra was declared "a frontier of need." Humanitarian concerns and mounting public pressures, both in Britain and other Western countries, prompted the relief condition in Biafra to be declared an emergency.

International voluntary relief workers found themselves for the first time at the center stage of a relief crisis that involved numerous governments and public opinion across the globe.

Despite the existing research on humanitarianism of the Nigerian Civil War, until now no scholar has explored the British move to deploy the RAF for relief flights to Biafra.

The need to overcome the difficulties of the Nigerian Civil War, and the heavy pressure of British parliamentarians, the press, and the public served as major factors leading to engaging the RAF to supply relief materials.

The RAF episode indicated that external actors in any conflict can produce good initiatives geared toward resolving conflicts.