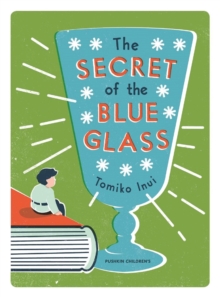 The secret of the Blue Glass

&lt;p&gt;&lt;strong&gt;A magical miniature family's adventures in wartime Japan&lt;/strong&gt;&lt;/p&gt;&lt;p&gt;In a dusty library, in the quietest corner of a house in a Tokyo suburb, live the Little People: Fern and Balbo, Robin and Iris.

Just a few inches high, sleeping in cigarette boxes and crafting shoes from old book jackets, they need only one thing from their Humans - a nightly glass of milk, served in a sparkling Blue Glass goblet, by a trusted young member of the Human family.&lt;/p&gt;&lt;p&gt;But when the Second World War comes to Japan, bringing a dangerous new kind of patriotism, both Humans and their beloved Little People face a world they could never before have imagined.

It will take great love, bravery, and a rather loyal pigeon, to bring their unique families back together once more...&lt;/p&gt;&lt;p&gt;Born in Tokyo in 1924, Tomiko Inui joined a publishing house in 1950, where she began working as an editor, as well as writing books for children.

She published many books over her long career, winning prizes along the way including the Mainishi Publishing Culture Award and the Akaitori Award for Children's Literature.

She was also runner-up in 1964 for the Hans Christian Andersen prize. &lt;em&gt;The Secret of the Blue Glass&lt;/em&gt; is the first of her books to be translated into English.