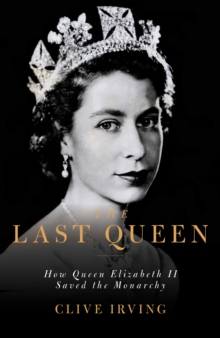 The last queen : Elizabeth II's seventy-year battle to save the House of Windsor

Unseen behind the throne, two sides of the royal bloodline competed for influence, and egregious family secrets had to be protected.

Meanwhile, in public, a succession of family ruptures put the monarchy under unprecedented scrutiny from the world's media.

From the turbulent loves of Princess Margaret to the tragic saga of Princess Diana, from the torments of Prince Charles to the arrival of Meghan Markle, tensions gripped the House of Windsor.

Through all this, Elizabeth II remained steadfast in her values while many of those around her seemed to lose their moorings.

Clive Irving's gripping account casts new light on seventy tempestuous years of British history, exploring how the Queen, uncomfortable with the pace of the social and cultural changes in her nation, and often seeming out of touch, resolutely kept the monarchy stable in a rapidly changing world.

With unparalleled insight, Irving examines the pivotal events of the Queen's reign and then steps above them to assess her role in the royal family's Faustian pact with the media.

The final irony is, as Irving's carefully measured scrutiny shows, that in the last decades of her reign the Queen endures to become one of the most admired people in the world while remaining one of the least known and understood.

She will likely be the last Queen of the United Kingdom.