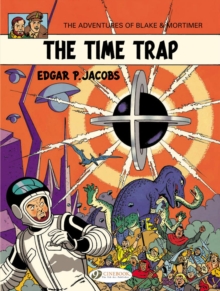 Part of the The adventures of Blake & Mortimer ; 19 series

An enemy's vengeance from the grave traps Mortimer out of time. Professor Mortimer is bequeathed an old house in France by a former adversary: Miloch, the evil genius of SOS Meteors fame.

Along with the house is a letter inviting the Briton, as the only man of worthy intellect, to discover a fabulous invention left behind by the departed.

Following recorded instructions, Mortimer activates the device ...and wakes up a hundred million years in the past!

The most distinguished duo of gentleman-adventurers, battling the forces of evil and their arch nemesis Olrik around the globe, below the earth, even across time itself...The 19th adventure of Her Majesty's finest protectors!