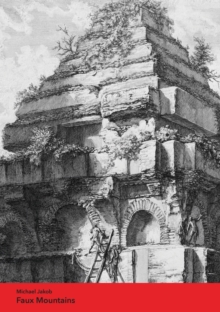 Artificial mountains are a worldwide reality. Burial sites use, very frequently, the intimidating shape of the man-made mountain.

Mount Parnassus in Greece became an important element in European garden history and a symbol of the Renaissance.

In the Baroque Rome of the 17th century the most important artists worked on the constructions of huge ephemeral mounds in order to express more or less codified messages.

The model of the artificial mountain was used as well during the French Revolution: the famous celebration of the Supreme Being took place on a gigantic faux mountain.

The history of landscape architecture is characterised by the construction of architectural mounds, often built by using local excavation material.

The industrial revolution acted as another source for the rise of an anthropic topography, creating forms, which we do not recognise anymore as totally artificial.

Architects have found in the form of mountains a model and a gestalt with which to play in an ironic way.

Michael Jakob's comparative study is the first one to address this fascinating phenomenon. Artificial mountains are a worldwide reality. Their presence influenced the history of urbanism, architecture, and landscape architecture.

Michael Jakob's study is the first one to address this fascinating worldwide phenomenon stretching from Antiquity to our days.