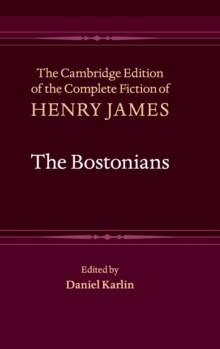 By: James, Henry,  Karlin, Daniel (University of Bristol)(Edited by)

The Cambridge Edition of the Complete Fiction of Henry James provides, for the first time, a scholarly edition of a major writer whose work continues to be read, quoted, adapted and studied.

The Bostonians is an extraordinary political and psychological drama narrating the struggle between Northern feminist Olive Chancellor and her cousin, former slaveholder and radical conservative Basil Ransom, for 'possession' of the beautiful, talented Verena Tarrant.

The issues raised of the relations between the sexes, between North and South and between differing visions of 'progress' in America are as timely - and contentious - as when the novel first appeared.

This fully annotated scholarly edition of one of James's most distinctive and important works features a detailed contextual introduction, full textual history and helpful explanatory annotation.

It will be of interest to researchers, scholars and advanced students of Henry James, and of nineteenth- and twentieth-century British and American fiction and literature.