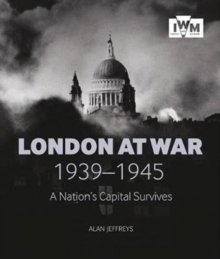 London was a city on the front line in the Second World War.

It suffered hits from nearly 12,000 tons of bombs, with nearly 30,000 civilians killed by enemy action.

The Blitz changed the landscape of the city. Many famous landmarks were hit, including Buckingham Palace, the Houses of Parliament, the Tower of London - even the Imperial War Museum.

Some areas, such as Stepney, were so badly damaged that they had to be almost entirely rebuilt after the war.

But it wasn't just the city's physical landscape that was transformed.

With the arrival of large numbers of Commonwealth and overseas service personnel, London became much more cosmopolitan.

After 1942, vast numbers of American servicemen were deployed in the capital, and it was also a busy transport hub and a popular destination for troops on leave.This book tells the story of these momentous years in London's history through IWM's unique collections.

Using personal accounts from letters and diaries, objects, photographs, maps and documents it gives an up-close and revealing insight into those turbulent years in the capital, experienced by those who lived there.