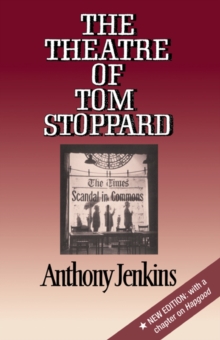 The Theatre of Tom Stoppard

Addressed to the enthusiastic theatregoer as well as to students of contemporary theatre, this new edition includes a fresh chapter on Hapgood.

Anthony Jenkins is an actor and director as well as a teacher of drama, and this refreshing perspective informs his writing.

He is interested in how Stoppard's plays work in the theatre (and on radio and television), and describes the playwright's use of stage space and action, interior emotions, the pauses in the dialogue, as well as the dialogue itself.

Recently, critics have pointed to the political emphasis of the later plays.

To Jenkins, Stoppard's career is all of a piece and is best described chronologically.

The whole dramatic output, with the exception of the adaptations and film-scripts, is examined in detail: three short stories and the novel Lord Malquist and Mr Moon are considered as essential to an appreciation of Stoppard's theatrical imagination; comments on the radio and television plays interweave and support discussion of the major plays from Rosencrantz and Guildenstern to The Real Thing and Hapgood.