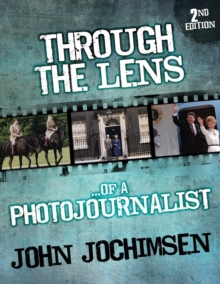 Through the lens of a photojournalist

John Jochimsen worked as a photojournalist for fifty years, devoting himself to the breaking news stories of the day.

This book contains over 100 of his most fascinating photographs.

From a unique picture of Haile Selassie and Winston Churchill, to rare pictures of Queen Elisabeth II and other Statesmen, this book has dozens of examples of pre-digital photojournalism.

In addition to high profile photographs like the personal Christmas card photo for Prime Minister Margaret Thatcher, the book also includes John's extensive work for the Ministry of Defence showcasing in particular their latest military aircraft.

Often risking his life to document many world conflicts his assignments included prolonged spells in the Sudan, Kenya, Liberia and Malaya, where he was caught in a fire-fight between British troops and insurgents.

His pictures defined an era, and appeared regularly in a string of newspapers and magazines across the globe.

This large format photobook shows these great pictures in all their glory and features several from John's biography '80 Years Gone In A Flash'.