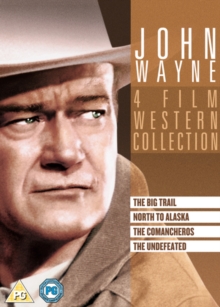 He plays the young leader of a pioneer wagon train travelling across the Oregon Trail.

Repulsing Indian attacks and battling against the hostile elements, The Duke still finds time for romance with a fellow traveller (Marguerite Churchill).

In 'The Comancheros (1961), Wayne stars as Texas Ranger Jake Cutter whose path crosses with that of professional gambler Paul Regret (Stuart Whitman).

The two become uneasy bedfellows in their quest to crush a powerful outlaw gang who are selling arms and alcohol to the local Indians.

This was director Michael Curtiz's last film and also stars Lee Marvin and Ina Balin. 'North to Alaska' (1960) is a lighthearted Western starring Wayne and Stewart Granger as rough and tumble gold prospectors in Alaska.

When Sam McCord (Wayne) and George Pratt (Granger) eventually strike it rich in the gold rush, George sends Sam to Seattle to fetch his fiancée; but Sam falls in love with her.

George eventually accepts his loss and sets about finding a new gal, but only seems to find trouble.

In 'The Undefeated' (1969), Confederate Colonel James Langdon (Rock Hudson) prepares to travel to Mexico with his family.

When they are attacked by bandits, Union Colonel J.H.

Thomas (Wayne) comes to their aid. The former enemies find themselves united in their efforts to resist Mexican Emperor Maximillian, and Juarez, the rebel leader.

When the rebels kidnap the Southerners, Colonel Thomas must decide whether to surrender his valuable herd of 3,000 horses and secure their release, or leave them to their fate.