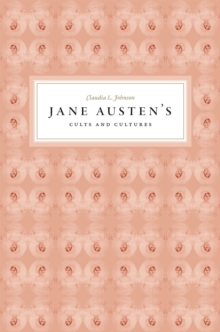 Jane Austen completed only six novels, but enduring passion for the author and her works has driven fans to read these books repeatedly, in book clubs or solo, while also inspiring countless film adaptations, sequels, and even spoofs involving zombies and sea monsters.

Austen's lasting appeal to both popular and elite audiences has lifted her to legendary status.

Johnson begins by exploring the most important monuments and portraits of Austen, considering how these artifacts point to an author who is invisible and yet whose image is inseparable from the characters and fictional worlds she created.

She then passes through the four critical phases of Austen's reception-the Victorian era, the First and Second World Wars, and the establishment of the Austen House and Museum in 1949-and ponders what the adoration of Austen has meant to readers over the past two centuries. For her fans, the very concept of "Jane Austen" encapsulates powerful ideas and feelings about history, class, manners, intimacy, language, and the everyday.

By respecting the intelligence of past commentary about Austen, Johnson shows, we are able to revisit her work and unearth fresh insights and new critical possibilities.

An insightful look at how and why readers have cherished one of our most beloved authors, "Jane Austen's Cults and Cultures" will be a valuable addition to the library of any fan of the divine Jane.