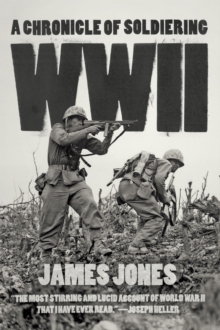 WWII : A Chronicle of Soldiering

In 1975, James Jones - the American author whose novels From Here to Eternity and The Thin Red Line had made him the preeminent voice of the enlisted man in World War II - was chosen to write the text for an oversized coffee table book edited by former Yank magazine art director Art Weithas and featuring visual art from World War II.

The book was a best seller, praised for both its images and for Jones' text, but in subsequent decades the artwork made it impossible for the book to be reproduced in its original form, and it fell out of print and was forgotten.

This edition of WWII makes available for the first time in more than twenty years Jones' stunning text, his only extended nonfiction writing on the war that defined his generation.

Moving chronologically and thematically through the complex history of the conflict, Jones interweaves his own vivid memories of soldiering in the Pacific - from the look on a Japanese fighter pilot's face as he bombed Pearl Harbor, so close that Jones could see him smile and wave, to hitting the beach under fire in Guadalcanal - while always returning to resounding larger themes. Much of WWII can be read as a tribute to the commitment of American soldiers, but Jones also pulls no punches, bluntly chronicling resentment at the privilege of the officers, questionable strategic choices, wartime suffering, disorganization, the needles loss of life, and the brutal realization that a single soldier is ultimately nothing but a replaceable cog in a heartless machine.

As the generation that fought and won World War II leaves the stage, James Jones' book reminds us of what they accomplished-and what they sacrificed to do so.