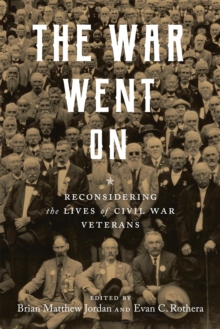 The War Went On : Reconsidering the Lives of Civil War Veterans

Part of the Conflicting worlds: new dimensions of the American Civil War series

Inspired by recent interest in memory studies and energised by the ongoing neorevisionist turn, a vibrant new literature has given the lie to the once-obligatory lament that the postbellum lives of Civil War soldiers were irretrievable.

Despite this flood of historical scholarship, fundamental questions about the essential character of Civil War veteranhood remain unanswered.

Moreover, because work on veterans has often proceeded from a preoccupation with cultural memory, the Civil War's ex-soldiers have typically been analysed as either symbols or producers of texts.

In The War Went On: Reconsidering the Lives of Civil War Veterans, fifteen of the field's top scholars provide a more nuanced and intimate look at the lives and experiences of these former soldiers. Essays in this collection approach Civil War veterans from oblique angles, including theater, political, and disability history, as well as borderlands and memory studies.

They also consider postwar political elections, veterans' business dealings, and even literary contests between onetime enemies and among former comrades.