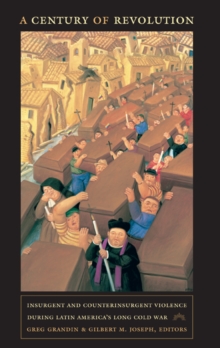 Latin America experienced an epochal cycle of revolutionary upheavals and insurgencies during the twentieth century, from the Mexican Revolution of 1910 through the mobilizations and terror in Central America, the Southern Cone, and the Andes during the 1970s and 1980s.

In his introduction to A Century of Revolution, Greg Grandin argues that the dynamics of political violence and terror in Latin America are so recognizable in their enforcement of domination, their generation and maintenance of social exclusion, and their propulsion of historical change, that historians have tended to take them for granted, leaving unexamined important questions regarding their form and meaning.

The essays in this groundbreaking collection take up these questions, providing a sociologically and historically nuanced view of the ideological hardening and accelerated polarization that marked Latin America's twentieth century.

Attentive to the interplay among overlapping local, regional, national, and international fields of power, the contributors focus on the dialectical relations between revolutionary and counterrevolutionary processes and their unfolding in the context of U.S. hemispheric and global hegemony. Through their fine-grained analyses of events in Chile, Colombia, Cuba, El Salvador, Guatemala, Mexico, Nicaragua, and Peru, they suggest a framework for interpreting the experiential nature of political violence while also analyzing its historical causes and consequences.

In so doing, they set a new agenda for the study of revolutionary change and political violence in twentieth-century Latin America.ContributorsMichelle ChaseJeffrey L.