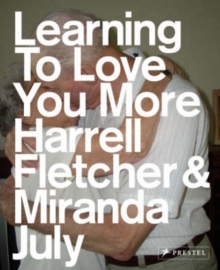 Learning to love you more

In a world obsessed with 'reality' programming, the collaborative public art project known as "Learning To Love You More" offers a refreshing take on how people think, act and love.

Created by Miranda July and Harrell Fletcher, the web-based project, begun in 2002, offers more than sixty 'assignments' that can be completed by anyone: 'Write the phone conversation you wish you could have'; 'Draw a constellation from someone's freckles'; 'Take a flash photo under your bed.' Completed assignments are posted on the web site; to date, more than 5,000 people have participated - artists and non-artists of all ages, from Tokyo to Tel Aviv.

July and Fletcher have curated a selection of the most memorable submissions - some moving, others hilarious and oddly brilliant, to create a pop culture collage that tells a larger story about life today.

The result is an engaging, heartwarming, idea sparking book sure to inspire, teach, and entertain.

Her film "Me And You And Everyone We Know" (Film Four) was a cult hit in 2005 - it won 15 Awards including the Golden Camera at Cannes and the Special Jury Prize for Originality of Vision at the Sundance film festival.