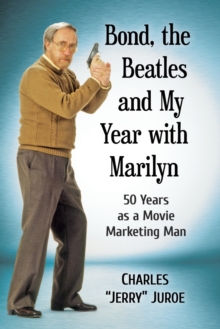 Bond, the Beatles and My Year with Marilyn : 50 Years as a Movie Marketing Man

In a remarkable fifty-year career, international film publicist, executive and production associate Charles "Jerry" Juroe met, knew, or worked with almost "Anyone Who Was Anyone" from directors like Cecil B.

DeMille and Alfred Hitchcock to stars like Pickford, Monroe, Hope, Hepburn, Brando, and The Beatles!

But he made his name working on the iconic James Bond films...

From Dr. No to GoldenEye, he traveled the globe with Sean Connery, Roger Moore, Timothy Dalton and Pierce Brosnan along with the world's most beautiful actresses and some of the most talented filmmakers working in modern cinema.

As a young soldier, Jerry also took part in one of the most significant events of the 20th Century - the D Day invasion of Normandy.

Talk about a life in full! This is his story: unique, memorable, and full of the kind of Hollywood history only a true insider can experience.