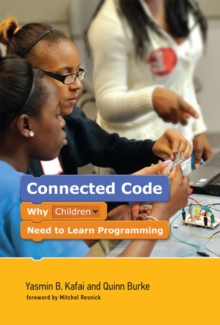 Part of the The John D. and Catherine T. MacArthur Foundation series on digital media and learning series

Why every child needs to learn to code: the shift from "computational thinking" to computational participation. Coding, once considered an arcane craft practiced by solitary techies, is now recognized by educators and theorists as a crucial skill, even a new literacy, for all children.

Programming is often promoted in K-12 schools as a way to encourage "computational thinking"-which has now become the umbrella term for understanding what computer science has to contribute to reasoning and communicating in an ever-increasingly digital world. In Connected Code, Yasmin Kafai and Quinn Burke argue that although computational thinking represents an excellent starting point, the broader conception of "computational participation" better captures the twenty-first-century reality.

Computational participation moves beyond the individual to focus on wider social networks and a DIY culture of digital "making."Kafai and Burke describe contemporary examples of computational participation: students who code not for the sake of coding but to create games, stories, and animations to share; the emergence of youth programming communities; the practices and ethical challenges of remixing (rather than starting from scratch); and the move beyond stationary screens to programmable toys, tools, and textiles.