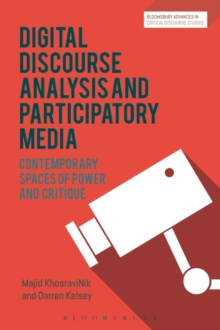 Part of the Bloomsbury Advances in Critical Discourse Studies series

This book explores mechanisms of discourse and power on social media.

KhosraviNik and Kelsey adopt interdisciplinary transnational perspectives on current debates about the role of social media in society.

Using case studies from UK, US and Middle Eastern contexts which will be of interest to those within the field of critical discourse studies (CDS) and beyond, this book provides complex explorations of ideology and power in online/offline environments.

By proposing a unique model for understanding the multiple mechanisms of macro and micro power on social media, the authors develop an innovative approach to CDS that is appropriate for future research. As a socially oriented critical study of communication, this book argues that CDS cannot shy away from accounting for changes both at the micro-analytical and macro-contextual dynamics.

Tackling topics such as the discursive construction of a nationalist identity in Iranian Facebook, the complex power relations behind 'the Twitter Joke trial', and what a fight on a Connecticut beach can reveal about discourse and surveillance culture, Kelsey and KhosraviNik build on their previous research on the discursive practices of power, ideology, language, surveillance and social media to show how CDS can continue to adapt and evolve by accounting for digital media discourses.