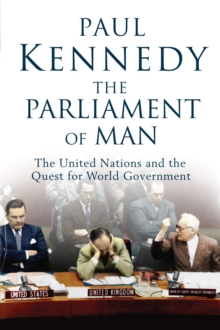 The parliament of man : the United Nations and the quest for world government

In the course of the twentieth century, there occurred a development unique in the story of humankind.

States, which had defined themselves from Thucydides to Bismarck by their claims to sovereign independence, gradually came together to create international organizations to promote peace, curb aggression, regulate diplomatic affairs, devise an international code of law, encourage social development, and foster prosperity.

The emergence of this network of forms of global governance was not straightforward, and the debate about its role is just as heated today as it was generations ago.

In this long-awaited new book, Paul Kennedy, probably the best-selling historian now living, examines this key development in the history of our century. Beginning with the earliest forms of international organisation, he goes on to trace the creation and changing role of the UN in the post-war era, and finally suggests how, in the face of new threats to security and the continued vigour of at least some nation states, the institution will need to change over the course of the 21st century, arguing that we all share the responsibility to make the only world organisation we possess work, as well as possible.