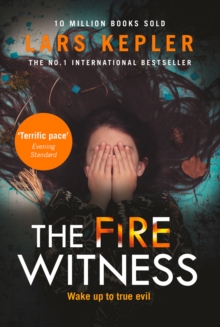 Part of the Joona Linna series

WAKE UP TO TRUE EVIL The third gripping thriller in Lars Kepler's bestselling series featuring Joona Linna. Perfect for fans of Stieg Larsson and Jo Nesbo. ONE GIRL IS DEADAt a home for troubled girls, a young girl has been brutally murdered during the night.

Her body is found arranged in bed with her hands covering her eyes. ONE GIRL IS MISSINGVicky Bennet is the only girl unaccounted for.

When a bloody hammer is discovered under her pillow, it appears that she was more than just a witness to the killing. ONE GIRL CLAIMS TO HAVE SEEN IT ALLDetective Inspector Joona Linna is called in to piece the evidence together.

But the case quickly descends into darker, more violent territory, leading him finally to a shocking confrontation with the past. Praise for Lars Kepler: 'Scandi noir at its best' Evening Standard 'A rich, nuanced tale, ideal for beach reading, just as long as the beach doesn't harbor too many shadows' Kirkus 'A brilliant thriller' Norrkoepings Tidningar 'Taking Europe by storm' Daily Mail 'Kepler has a direct line to a very dark place in the human soul' Lev Grossman, Time 'More energetic than Mankell, as socially involved as Larsson, Kepler matches Jo Nesbo for gothic excitement' Weekend Australian