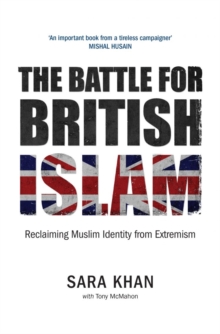 The battle for British Islam : reclaiming Muslim identity from extremism

Across Britain, Muslims are caught up in a battle over the very nature of their faith. And extremists appear to be gaining the upper hand. Sara Khan has spent the past decade campaigning for tolerance and equal rights within Muslim communities, and is now engaged in a new struggle for justice and understanding - the urgent need to counter Islamist-inspired extremism.In this timely and courageous book, Khan shows how previously antagonistic groups of fundamentalist Muslims have joined forces, creating pressures that British society has never before encountered.

What is more, identity politics and the attitudes of both the far Right and ultra-Left have combined to give the Islamists ever-increasing power to spread their message.

Unafraid to tackle some of the pressing issues of our time, Sara Khan addresses the question of how to break the cycle of extremism without alienating British Muslims.

She calls for all Britons to reject divisive ideologies and introduces us to those individuals who are striving to build a safer future.