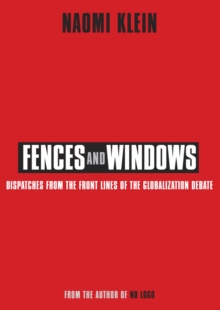 Fences and windows : dispatches from the front lines of the globalization debate

This is a history of the rise of the anti-globalization movement, from Seattle to September 11th, 2001.

The text charts the group's most notable successes and its failures and is international in scope, covering everything from the Zapatistas' rebellion in Mexico to the Social Centres in Italy, from the biggest peaceful protest demos since the 1960s to the gassings and shootings at Genoa.

The author analyses developments in local democracy, in law enforcement, in privatization laws, in capital migrations, in union behaviour, in marketing, in summitry.

She gets close to the suited summits - the WTO, the G8, the IMF, and NAFTA - and looks at issues as diverse as bioterrorism, pollution, hypocrisy, fear and confusion.

The book could be considered a portrait, or rather the underlying negative, of the planet's torrid time between the Seattle summit and the world-changing events of 11 September 2001.