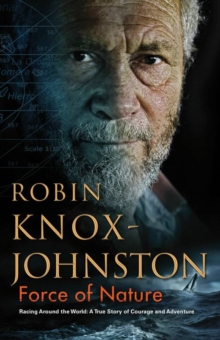 Force of nature : racing around the world

In 1968, Sir Robin Knox-Johnston became the first person ever to sail solo, non-stop round the world.

In October 2006, at the age of sixty-seven - when most people would be settling in to a well-earned retirement - Sir Robin embarked on another gruelling circumnavigation of the globe.

The sea made no allowances for his seniority. Within days of setting off, near-hurricane-strength storms in the Bay of Biscay capsized his yacht.

Three-quaters of the entire fleet had to turn back."Force of Nature" is Sir Robin's account of his extraordinary return to the ultra-competitive, punishing world of single-handed round-the-world racing.

It's a story of courage and astonishing resilience played out against thousands of miles of awesome ocean.

Sir Robin's age makes it a unique achievement. It's difficult to overstate the physical and emotional strain to which he subjected himself.

His toughness, determination and zest for life is inspiring.

The gripping story of his last solo sail around the globe couldn't convey more powerfully the idea that age is no barrier to realising your dreams. His achievement is a triumph to compare with the most outstanding in sailing history.