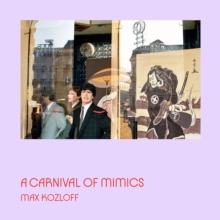 A Carnival Of Mimics

Powerhouse Books,U.S.
157687964X / 9781576879641
Hardback
20/10/2020
Published 20/10/2020
United States
279 x 279 mm 80 pages, 1 Illustrations, unspecified
General (US: Trade)  Learn More
A Carnival of Mimics is a new photo essay from acclaimed photographer and art critic Max Kozloff. A street photographer on the lookout for miscellaneous piquancies, Kozloff gradually became aware that commercial effigies and statues, dummies and mannikins had begun to infiltrate his urban subject matter. He had accidentally documented a large selection of incredibly expressive nave sculpture. Underfoot or overhead, these ';mimics' comprise a sub population that begs for notice and often does not get it. Somewhere in the realm between banal and mysterious, in his hands this animistic spectacle acquires eerie overtones and beautiful presentation. A Carnival of Mimics is a late-career masterpiece, from one of modern photography's most important minds.