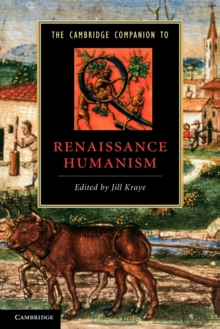 The Cambridge companion to Renaissance humanism

From the fourteenth to the seventeenth century, humanism played a key role in European culture.

Beginning as a movement based on the recovery, interpretation and imitation of ancient Greek and Roman texts and the archaeological study of the physical remains of antiquity, humanism turned into a dynamic cultural programme, influencing almost every facet of Renaissance intellectual life.

The fourteen original essays in this volume deal with all aspects of the movement, from language learning to the development of science, from the effect of humanism on biblical study to its influence on art, from its Italian origins to its manifestations in the literature of More, Sidney and Shakespeare.

A detailed biographical index, and a guide to further reading, are provided.

Overall, The Cambridge Companion to Renaissance Humanism provides a comprehensive introduction to a major movement in the culture of early modern Europe.