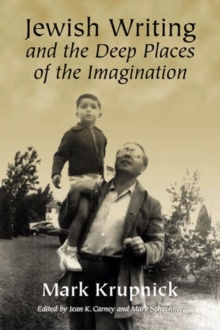 Jewish writing and the deep places of the imagination

By: Krupnick, Mark,  Carney, Jean K.(Edited by),  Shechner, Mark(Edited by)

When he learned he had ALS and roughly two years to live, literary critic Mark Krupnick returned to the writers who had been his lifelong conversation partners and asked with renewed intensity: how do you live as a Jew, when, mostly, you live in your head?

The evocative and sinuous essays collected here are the products of this inquiry.

In his search for durable principles, Krupnick follows Lionel Trilling, Cynthia Ozick, Geoffrey Hartman, Philip Roth, Saul Bellow, and others into the elemental matters of life and death, sex and gender, power and vulnerability.

The editors - Krupnick's wife, Jean K. Carney, and literary critic Mark Shechner - have also included earlier essays and introductions that link Krupnick's work with the "deep places" of his own imagination.