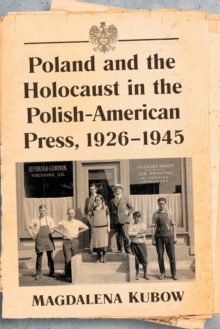 Poland and the Holocaust in the Polish-American Press, 1926-1945

Contrary to the common notion that news regarding the genocide was unavailable or unreliable, news from Europe was often communicated to North American Poles through the Polish-language press.

This work engages with the origins of this debate and demonstrates that the Polish-language press covered seminal issues during the inter-war years, the war, and the Holocaust extensively on their front and main story pages, and were extremely responsive, professional, and vocal in their journalism.

From Polish-Jewish relations, to the cause of the Second World War and subsequently the development of genocide-related policy, North American Poles, had a different perspective from mainstream society on the "causes and effects" of what was happening.

New research for this book examines attitudes toward Jews prior to and during the Holocaust, and how information on such attitudes was disseminated.

It utilizes original research from selected Polish newspapers, predominantly the Republika-Gornik, as well as survivor testimony from 1926-1945.