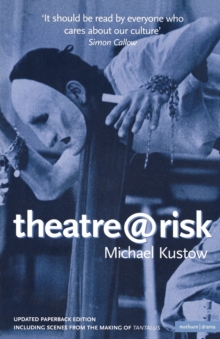 Part of the Diaries, Letters and Essays series

A vivid and passionate polemic about the importance of live theatre in a digital age, by a man at the cutting edge of drama and innovation For over thirty years Michael Kustow has been in the thick of innovative, international theatre.

Passionate, combative and compelling, he tells us why we need live drama more than ever.

Set against the extraordinary background of his efforts to produce Tantalus, a theatrical epic about the Trojan War, Kustow charts a story from the birth of the RSC to work with such pioneers as Jerzy Grotowski, Peter Brook and Theatre de Complicite.

Moving from memoir to argument, from close theory to personal portrait, the result is an urgent and powerful case for theatre in our age of global screens and networks, and a book that speaks to anyone who cares about the humanity of our 'wired world'.

This paperback edition includes updated material on the production of Tantalus and the difficulties that surrounded the project."Rare is the book that transforms the personal experiences of a theatregoer into the testimony of a pulsating polemic and a cultural statement of significance. Writers such as George Bernard Shaw, Kenneth Tynan and Charles Marowitz have managed this trick.

Now Kustow, who knew those last two pretty well, has done it himself" - Michael Coveney, Daily Mail"It should be read by everyone who cares about our culture" - Simon Callow, Sunday Times