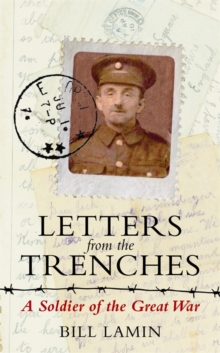 Letters from the trenches: a soldier of the Great War

Harry Lamin was born in Derbyshire in 1877 and left school at thirteen to work in the lace industry, but by December 1916 he had been conscripted into the 9th Battalion, York and Lancaster Regiment and sent to war.

Harry's letters home to his family describe the conflict with a poignant immediacy, even ninety years on, detailing everything from the action in battle to the often amusing incidents of life amongst his comrades.

Throughout the letters, Harry's tone is unwaveringly stoical, uncomplaining and goodhumoured.

Letters From The Trenches is a fitting tribute to the unsung heroes of the Great War who fought and endured and returned home, and the one in six who did not.

The letters describe the war through the eyes of those who really lived it, bringing the horrors and triumphs to life for the twenty-first-century reader.

Edited by Harry's grandson, Bill, Letters From The Trenches tells the moving story of a brave, selfless and honourable man who endured everything that the war could throw at him, and still came up smiling.