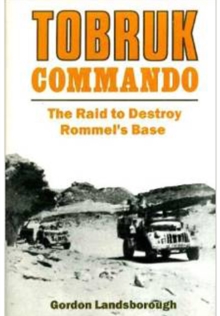 "Gentlemen, we are going to capture Tobruk and destroy it." 'Operation Agreement' started as a fairly simple plan to destroy Rommel's bomb-proof oil-storage tanks at Tobruk on the eve of Alamein.

But, catching the imagination of GHQ, the plan snowballed alarmingly.

As well as a commando unit led by the plan's originator, Colonel Haselden, it came to include the RAF, the Royal Navy, the Marines and two of the largest destroyers in the Mediterranean. It was a daring attempt to rob Rommel at one stroke of the three essentials to success in North Africa - oil, a supply port and shipping.

But the calculated risks began to out balance the chances of success when it seemed that every dockyard worker in Alexandria and every cocktail-party-goer in Cairo knew about the raid before the officers and men set out.

The operation went on, and became a tragedy of slaughtered men and sunken ships. Tobruk Commando is a classic adventure story of the Second World War.

The fast-moving action centres on the small commando of men which set out secretly through the deserts towards Tobruk.

After a long journey across the desert sand, they arrived disguised as a group of POWs and their German captors. Expertly written, this is a wonderful tale of heroic bluff and a venture to test the courage and nerves of the toughest men.