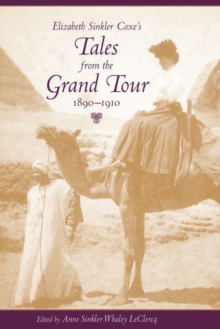 Part of the Women's Diaries & Letters of the South series

Elizabeth Sinkler Coxe's Tales from the Grand Tour, 1890-1910 is a travelogue of captivating adventures through exotic lands as experienced by an intrepid American aristocrat and her son at the dawn of the twentieth century.

A member of the prominent Sinkler family of Charleston and Philadelphia, Elizabeth ""Lizzie"" Sinkler married into Philadelphia's wealthy Coxe family in 1870.

Widowed just three years later, she dedicated herself to a lifelong pursuit of philanthropy, intellectual endeavor, and extensive travel.

Heeding the call of their adventuresome spirits, Lizzie and her son Eckley set sail in 1890 on a series of odysseys from the United States to Cairo, Luxor, Khartoum, Algiers, Istanbul, Naples, Vichy, and Athens.

Like many of their peers in the upper echelons of American society, this wealthy duo were drawn into the Egyptian craze that swept late-nineteenth-century society, and they fully immersed themselves in the nascent field of scientific archaeology.

More obsessed and philanthropic than most, the Coxes not only visited the sites and monuments of ancient civilizations but also participated in digs, funded entire expeditions, and subsidized the creation of the Coxe Wing of Ancient History at the University of Pennsylvania Museum.

A prolific correspondent, Lizzie conscientiously recorded her adventures abroad in lively prose that captures the surreal exhilarations and harsh realities of traversing the known and barely known worlds of Africa and the Middle East.

Her letters and recollections are complemented by numerous photographs and several original watercolor paintings.

By words and pictures, Lizzie Coxe's ""Tales from the Grand Tour"" reveal the turn-of-the-century excitement about the burgeoning field of Egyptology, the intellectual pursuits available to women of means, and the familial and social ties between the upper classes of the North and South, that predated and survived the Civil War.