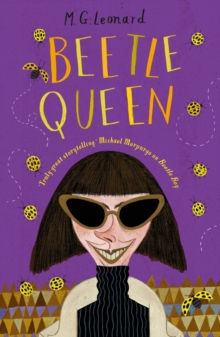 Part of the The Battle of the Beetles series

The second book in the BATTLE OF THE BEETLES series - perfect for fans of Roald Dahl! 'Truly great storytelling.' MICHAEL MORPURGO on BEETLE BOY 'I predict Beetle-mania' THE TIMES on BEETLE BOY 'Roald Dahl meets 101 Dalmatians in a rollicking ride, full of adventure with vivid characters' EXPRESS on BEETLE BOY Cruel beetle fashionista, Lucretia Cutter, is at large with her yellow ladybird spies. When Darkus, Virginia and Bertolt discover further evidence of her evil, they're determined to stop her.

But the three friends are in trouble. Darkus' dad has forbidden them to investigate any further - and disgusting crooks Humphrey and Pickering are out of prison. Hope rests on Novak, Lucretia's daughter and a Hollywood actress, but the beetle diva is always one scuttle ahead ... The second book in MG Leonard's acclaimed trilogy, followed by Battle of the Beetles! Featuring exotic beetles, a daring quest, a mixture of bold male and female characters and a truly venomous villain The story follows Darkus, Bertolt and Virginia - and their beetle pals - asthey investigate the wicked 'Beetle Queen' Lucretia From the author of the Adventure on Trains series, co-written with Sam Sedgman