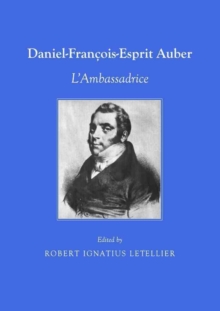 Daniel-Francois-Esprit Auber (1782-1871), the most amiable French composer of the 19th century, came to his abilities late in life.

After a stalled commercial career, he studied with Cherubini.

His first works were not a success, but La Bergere Chateleine (1820), written at the age of 38, established him as an operatic composer.

He then met the librettist Eugene Scribe (1791-1861), with whom he developed a working partnership, one of the most successful in musical history, that lasted until Scribe's death.

In 1829 he was appointed a member of the Institut, in 1839 Director of Concerts at Court, in 1842 Director of the Conservatoire, in 1852 Musical Director of the Imperial Chapel, and in 1861 Grand Officer of the Legion d'Honneur.Auber's famous historical grand opera La Muette de Portici (also known by its hero's name as Masaniello) is a key work in operatic history, and helped to inspire the 1830 revolution in Brussels that led to the separation of Belgium from Holland.

The latter (the Commune) hastened the end of his life.

He died on 12 May 1871, at the advanced old age of 89, and in the pitiful conditions of civil strife, after a long and painful illness which worsened during the Siege of Paris.

He had refused to leave the city he had always loved despite the dangers and privation, even after his house had been set on fire by the petroleurs et petroleuses.

By some irony a mark had been placed against the house of the composer of Masaniello, the very voice of Romantic liberty!Auber's overtures were once known everywhere, a staple of the light Classical repertoire.

The influence of his gracious melodies and dance rhythms on piano and instrumental music, and on the genre of Romantic comic opera, especially in Germany, was overwhelming.

The operas themselves, apart from Fra Diavolo (1830), have virtually passed out of the repertoire, since Auber's elegant and restrained art now has little appeal for the world of music, attuned as it is to the meatier substance of verismo, high Wagnerian transcendentalism, and 20th-century experimentalism.L'Ambassadrice, an opera-comique in three acts with libretto by Eugene Scribe, had its first performance at the Opera-Comique (Salle de la Place de la Bourse) on 21 December 1836.This tale of social intrigue and artistic integrity centres around the lives of two opera singers in Munich, Henriette and Charlotte.

Henriette is wooed by the Prussian ambassador, Count Benedict de Valberg, and is persuaded by her aunt, Mme Barnek, a social climber, to accept him.

In Berlin, where Henriette awaits the sovereign's consent to the marriage, she and her aunt pass themselves off as Bavarian aristocrats, but when the Munich opera company arrives in Berlin, Charlotte, recognizing her old rival, betrays her.

Henriette then finds a compromising note in Charlotte's handwriting addressed to the Count, and vows revenge on both of them.

Henriette takes Charlotte's place on the stage, and after the performance, she tears up the marriage contract, vowing to devote her life to the stage rather than to continue aristocratic pretence with an unfaithful husband.This work is one of the composer's best.

The libretto is ingenious and charming. The score was written especially for Laure Cinti-Damoreau, and is rich in vocal display, fitting for a prima donna.

The original success of this opera was later augmented in 1850 by topical developments, when the famous singer Henriette Sontag left the stage to marry the Sardinian diplomat the Comte de Rossi.

The whole scenario is buoyed by the perennial and resonant folk motif of personal victory over challenge, optimally realized in professional success combined with social advancement.

The scale and structure of the opera reflects a more intimate dramaturgy.

Auber's music is by turns lively, touching, playful and tender.

There were 417 performances altogether, and the work was translated into German, Danish, English, Swedish and Spanish.