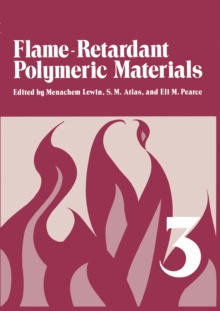 Flammability has been recognized as an increasingly important social and scientific problem.

Fire statistics in the United States (Report on the National Commission on Fire Prevention and Control, "America Burning," 1973) emphasized the vast devastation to life and property-12,000 lives lost annually due to fire and these deaths are usually caused by inhaling smoke or toxic gases; 300,000 fire injuries; 11. 4 billion dollars in fire cost of which 2. 7 billion dollars is related to property loss; a billion dollars to burn injury treatment; and 3. 3 billion dollars in productivity loss. It is obvious that much human and economic misery can be attributed to fire situations.

In relation to this, polymer flammability has been recognized as an increasingly important social and scientific problem.

The development of flame-retardant polymeric materials is a current example where the initiative for major scientific and technological developments is motivated by sociological pressure and legisla- tion.

This is part of the important trend toward a safer environment and sets a pattern for future example.

Flame retardancy deals with our basic everyday life situations-housing, work areas, transportation, clothing and so forth- the "macroenvironment" capsule within which "homosapiens" live.

As a result, flame-retardant polymers are now emerging as a specific class of materials leading to new and diversified scientific and technological ventures.