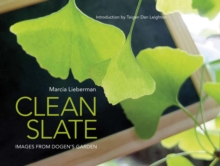 Clean Slate combines Dogen's poetry with images of plants he might have seen during his lifetime while living in Japan.

With the support of Kyoto University and the San Francisco Botanical Garden Library, Marcia was able to complete research that led to a list of plants that are recorded to have existed in Japan during the 13th century.

She made it her intention to find and photograph these specimens.

The gathering of these images is not to make a scientific analysis, rather to consider and imagine what beauty provoked his writing. Japanese literature is well populated with descriptions of beauty and imperfection.

Marcia's pictures isolate and render the plant so that it no longer is a member of a garden, but rather an example, a cue, an object that invites the viewer.

Alone in the garden. Throughout the history of literature there are inquiries as to where an author lived; what studio setting a painter worked in; what musical melodies influenced a composer's ater work.

Clean Slate brings the rhyme of Dogen together with the glance of things both he and Lieberman might have seen.