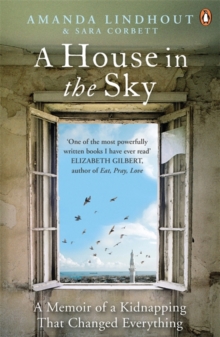 A house in the sky : a memoir of a kidnapping that changed everything

A House in the Sky is the dramatic and redemptive memoir of Amanda Lindhout, a woman whose curiosity led her to the world's most beautiful and remote places, its most imperiled and perilous countries, and then into fifteen months of harrowing captivity-an exquisitely written story of courage, resilience, and grace. As a child, Amanda Lindhout escaped a violent household by paging through issues of National Geographic and imagining herself in its exotic locales.

At the age of nineteen, working as a cocktail waitress, she began saving her tips so she could travel the globe.

Aspiring to understand the world and live a significant life, she backpacked through Latin America, Laos, Bangladesh, and India, and emboldened by each adventure, went on to Sudan, Syria, and Pakistan.

In war-ridden Afghanistan and Iraq she carved out a fledgling career as a television reporter. And then, in August 2008, she traveled to Somalia-"the most dangerous place on earth." On her fourth day, she was abducted by a group of masked men along a dusty road. Held hostage for 460 days, Amanda converts to Islam as a survival tactic, receives "wife lessons" from one of her captors, and risks a daring escape.

Moved between a series of abandoned houses in the desert, she survives on memory-every lush detail of the world she experienced in her life before captivity-and on strategy, fortitude, and hope.

When she is most desperate, she visits a house in the sky, high above the woman kept in chains, in the dark, being tortured. Vivid and suspenseful, as artfully written as the finest novel, A House in the Sky is the searingly intimate story of an intrepid young woman and her search for compassion in the face of unimaginable adversity.

For fans of the award-winning blockbuster Captain Phillips and readers of Kate McCann's Madeleine, Natasha Kampusch's 3,096 Days and Greg Mortenson's Three Cups of Tea. Amanda Lindhout is the founder of the Global Enrichment Foundation, a non-profit organization that supports development, aid and education initiatives in Somalia and Kenya.

For more information, visit Amandalindhout.com and globalenrichmentfoundation.comSara Corbett is a contributing writer to The New York Times Magazine.

Her work has also appeared in National Geographic; Elle; Outside; O, the Oprah magazine; Esquire; and Mother Jones.