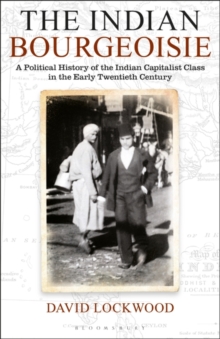 The Indian Bourgeoisie : A Political History of the Indian Capitalist Class in the Early Twentieth Century

The complex and hard-fought movement for political freedom in India coincided with the rise of a wealthy capitalist class of Indian industrialists who had profited under British rule.

By 1947, these prominent businessmen had forged a partnership with the socialist-led Indian National Congress, and supported Jawaharlal Nehru's implementation of a centrally-planned economy.

In this political history of modern India, David Lockwood traces the roots of this capitalist class, concentrated in Bombay, Calcutta and the west Bengal coal mining region, and examines British economic policy in the nineteenth century.

Indian capitalists, such as J.R.D Tata of Tata Steel, established powerful relationships with domestic governments throughout the period, holding indigenous industrial conferences and supporting the swadeshi movement which aimed to promote Indian-manufactured goods.

The Indian Bourgeoisie is a unique and important contribution to the lively debate on the role of India's capitalists during the Raj and throughout the early years of independence.