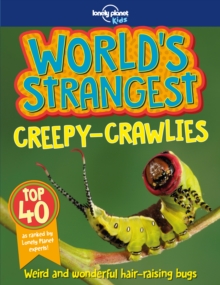 Enter the weird and wonderful world of creepy-crawlies.

Our animal experts have unearthed 40 of the planet's most bizarre species and ranked them in order of their oddness!

With jaw-dropping facts and amazing photos, we reveal each creature's seriously strange characteristics and the unusual ways they hunt, eat or defend themselves. They're sometimes hard to spot, but there are a mind-boggling 10 billion billion bugs on the planet.

Inside World's Strangest Creepy-Crawlies, kids will discover the tiny terror that blows itself up to save its friends, a creature so well disguised even its own species can't see it, and a giant spider the size of a dinner plate. And with our 'strange-o-meter', they can compare each animal based on its creepiness, fight factor and superpowers!