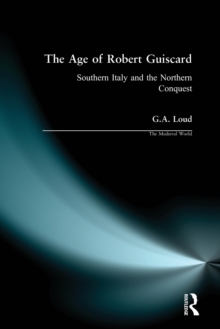 The age of Robert Guiscard : southern Italy and the Norman conquest

By: Loud, Professor Graham A.

Part of the The Medieval World series

This book is a wide ranging and engaging account of the conquest of southern Italy and Sicily by the Normans during the eleventh century.

The central figure in this conquest was Robert 'Guiscard' (the cunning), son of a minor landowner from western Normandy who, as Duke of Apulia, became the dominant ruler of southern Italy, and was a key figure in the European politics of the time.While examining the process by which the conquest took place, Guiscard's role within it, and his turbulent role in the south, this work places the Norman takeover in context.

It examines both the historical evolution of southern Italy before the Normans, which made the conquest possible, and the hybrid society which that conquest created.

The relations of the Normans with their nominal overlord the papacy, and Guiscard's attempt to conquer the Byzantine Empire are also discussed in depth. Founded upon an unrivalled knowledge of the original sources for the conquest, this is a cogent and lucid analysis of a key medieval subject hitherto largely ignored by historians.