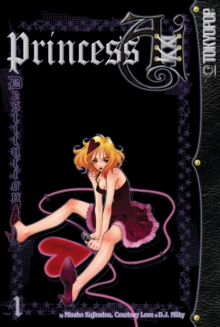 Part of the Princess Ai ; 1 series

We open on Ai, unconscious and sprawled sexily on a Tokyo street or alley, her clothes thrashed and torn.

She gets up and wanders into the Tokyo night, confused and in shock and wondering, "Where am I?" Ai is holding a heart-shaped box (which holds the Tenketsu jewelry given to her by Nora.) As she nears a busier street, a crook steals Ai's heart-shaped box and runs away.

Almost immediately, the crook begins to weaken from the toxic effect the box has on humans, making it easy for Kent to catch him and knock him down.

As Kent reaches for the heart-shaped box, Ai snaps at him not to touch it.

Ai's reluctance to explain why she snapped at Kent makes Kent believe Ai doesn't trust him.

In truth, Ai was only trying to protect him. As Kent tries to comfort the addled Ai, he asks her where she's going.

Not knowing what to say, Ai reads Kent's work I.D. badge and tells him she's heading for the University library (possibly the library at Shinjuku University).

Kent, clueless, tells Ai he's going there too (he's working the closing shift tonight) and they go together.

When Ai tries to get into the library without an I.D., Kent discovers she's not a student but lets her in anyway. Ai's keen intelligence, naivete, and thirst for knowledge about her new world make Kent really important and special to her.

As Kent familiarizes Ai with the library, romantic sparks fly between them.

Eventually, Kent must close the library for the night and the two of them leave.

Not wanting to admit to Kent that she's got nowhere to go, Ai wanders into the night, hungry and lost...until she's "recruited" by a nightclub scout for Club Cupid.

Note: In this chapter, there may be some evidence of feathers at special emotional moments (as a hint of Ai's angelic side.) Chapter 2: Ai reluctantly accepts work in a nightclub (Club Cupid).

Later that night, in the pre-dawn hours of the morning, an exhausted Ai leaves the club and wanders to the only place she knows: the University library.

Ai sleeps in a doorway until she's discovered by Kent (who's working the opening shift at the library.) Kent offers to take Ai to the apartment he shares with his roommate Hikaru and Ai agrees. On the way to the apartment, Kent might mention that he has an on-again/off-again relationship with his roommate Hikaru but it should be kept somewhat vague so that the reader is surprised when it's revealed that Hikaru is male.

Hikaru's got stronger feelings for Kent than Kent has for Hikaru and Hikaru is jealous of Ai.

After Ai has rested, she feels unwelcome at the apartment and returns to the library.

We show a research montage as Ai pores over information on biology, physics, hematology, and so on.

Ai will be able to see the Enoch reading of "Ai-Land" on the crest in Chapter 2.

That night, Ai has her first night on the job at the nightclub.

The chapter ends with a scene in the rain between Ai and Kent (a love scene?) with Hikaru spying on them.

Note: In this chapter, there may be some evidence of feathers at special emotional moments (as a hint of Ai's angelic side.) Chapter 3: It's a few days later and, in the nightclub, we can see that Ai is already starting to regain her self-confidence and adapt to her new environment.

To her surprise, she even finds herself enjoying some aspects of her new life. We meet Ai's boss and co-workers and see Ai's business interactions.

A customer wants to hear Ai sing and, when Ai takes the stage, everyone is mesmerized.

Back at the library, Ai has discovered the connection between cupid, arrows, and blood.

At some point in the library, Ai finds a book about slavery which gives her a flashback of the Maraqui slavery.

The chapter ends with Takeshi stalking Ai on her way to work and trying to recruit Ai to be the new "idol singer" for Hayabusa Talent Agency.

Ai refuses. Note: In this chapter, Ai's wings may start to manifest or at least partially appear.

Chapter 4: At Kent's apartment, Ai wakes to hear Kent and Hikaru in a lovers' spat over Ai.

Ai decides she's caused enough trouble and packs up her things to leave.

On the way out, Kent tries to stop her but Hikaru holds Kent back.

Faang will be able to "translate" Enoch for Ai until she remembers how to read it.

Faang shows up again in Chapter 4 with some sort of hint.

Checking into a dump, Ai spreads out her research in the apartment and frantically tries to work out the science behind her Tenketsu dilemma...to no avail. At the club, Ai's performances always mean the place is packed.

After work, Jen and Ai walk together. After they part company, Ai is being followed by a shadowy figure (a Furie).

When Ai realizes it, she starts to run. The Furie chases Ai, and this could be the moment when her wings first appear.

The chapter ends with Ai rounding a corner and smacking into Kent.

Note: In this chapter, Ai's wings may fully appear for the first time.

Chapter 5: Ai hides in Kent's trenchcoat as the Furie passes by.

Kent and Ai rush into a nearby doorway and Ai tells Kent she can't see him anymore-it's not meant to be.

Ai's desperate to get out and Kent doesn't want to let her go.

Ai leaves Kent, thanking him and telling him to go back to Hikaru, who loves him.

The chapter closes when the Furie manages to track Ai to the club.

Hayabusa and Takeshi are there and, desperate to escape the Furie, Ai signs up with them backstage and leaves with them in their limo.