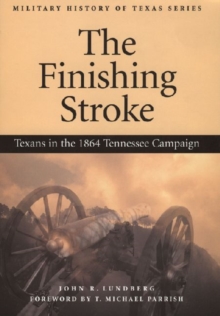 The Finishing Stroke : Texans in the 1864 Tennessee Campaign

Part of the Military History of Texas series

The annais of Texan bravery hold few better examples of bold determination and sheer audacity under impossible circumstances than the Battle of Franklin, Tennessee, on November 30, 1864.

On this one afternoon, a few thousand sons of the Lone Star State stood shoulder to shoulder and stepped off neatly in line of battle, their bands playing while Hardee Pattern blue battle flags filled out in a crisp autumn breeze.

Within a few minutes, hundreds would be dead and dying, as would their beloved leaders, Hiram Granbury and Pat Cleburne.

Virginians have Pickett's Charge as an example of unflinching nerve; for Texans, the field at Franklin became an immortal monument to courage in the face of long odds.

The opening volley of the eagerly anticipated Military History of Texas Series is The Finishing Stroke.

It follows them through the lull following the end of the Atlanta Campaign, the advance into Tennessee, and the battles of Allatoona Pass, Spring Hill, Franklin, and Nashville, as well as the retreat from Nashville.

The Finishing Stroke covers an area largely ignored in works on the American Civil War.

In the literature of Texas history, Texans serving in the Army of Tennessee have lived in the shadows of Hood's Brigade in Robert E.

Lee's army. Among histories of the Western Theater, the 1864 Tennessee Campaign is often given short shrift because of the generally held premise that following the loss of Atlanta in September the Confederacy was doomed.

This study moves the battles and sacrifices of this band of Texas heroes from the periphery of the Civil War to center stage.

The Finishing Stroke shows Texas warriors at their best, from Sul Ross's Texas Brigade at the head of Forrest's cavalry to Matt Ector's Texans cracking open the Federal position at Allatoona Pass.

In all of these fights, men from west of the Sabine and south of the Red served in the post of honor.

Now these Texans and their accomplishments, too long ignored in the realm of Civil War history, have been given their due.