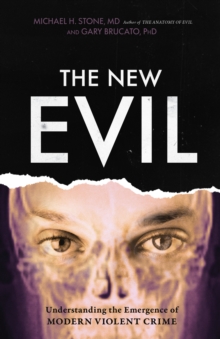 The New Evil : Understanding the Emergence of Modern Violent Crime

A CHILLING FOLLOW-UP TO THE POPULAR TRUE CRIME BOOK THE ANATOMY OF EVILRevisiting Dr. Michael Stone's groundbreaking 22-level Gradations of Evil Scale, a hierarchy of evil behavior first introduced in the book The Anatomy of Evil, Stone and Dr. Gary Brucato, a fellow violence and serious psychopathology expert, here provide even more detail, using dozens of cases to exemplify the categories along the continuum.

The New Evil also presents compelling evidence that, since a cultural tipping-point in the 1960s, certain types of violent crime have emerged that in earlier decades never or very rarely occurred.

The authors examine the biological and psychiatric factors behind serial killing, serial rape, torture, mass and spree murders, and other severe forms of violence.

They persuasively argue that, in at least some cases, a collapse of moral faculties contributes to the commission of such heinous crimes, such that "evil" should be considered not only a valid area of inquiry, but, in our current cultural climate, an imperative one.

They consider the effects of new technologies and sociological, cultural, and historical factors since the 1960s that may have set the stage for "the new evil." Further, they explain how personality, psychosis, and other qualities can meaningfully contribute to particular crimes, making for many different motives. Relying on their extensive clinical experience, and examination of writings and artwork by infamous serial killers, these experts offer many insights into the logic that drives horrible criminal behavior, and they discuss the hope that in the future such violence may be prevented.