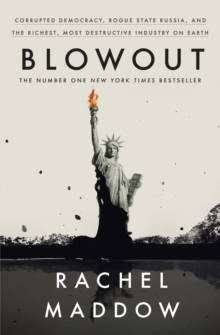 THE #1 NEW YORK TIMES BESTSELLERCorrupt? Yes. Unimaginably lucrative? Of course. But the enemy of democracy? Blowout is the oil and gas industry as we've never seen it before.

Blowout is a blackly comic switchback journey with America's most incisive political journalist, from Washington to Siberia and Equatorial Guinea, from deep within the earth's crust to the icy Arctic seas.

We witness the underground detonation of a nuclear bomb, an inept Russian spy ring, an international financial crisis, and murdered cows. And what it reveals is not just the greed and incompetence of Big Oil and Gas but why the Russian government hacked the 2016 U.S. election. Because Russia's rich reserves of crude have in fact stunted its growth, forcing Putin to maintain his power by spreading Russia's rot into its rivals, its neighbours, and the West's alliances. The oil and gas industry has polluted oceans and rivers but also polluted democracy itself - in developing and developed countries.

It has propped up authoritarian thieves and killers.

But being outraged at it is, according to Maddow, 'like being indignant when a lion takes down and eats a gazelle.

You can't really blame the lion. It's in her nature.'Blowout is our final wake-up call: to stop subsidizing oil and gas, to fight for transparency, and to check the influence of the world's most destructive industry.

The stakes have never been higher. As Maddow writes, 'Democracy either wins this one or disappears.'