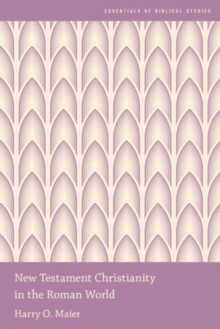 Part of the Essentials of Biblical Studies series

What did it mean to be a Christian in the Roman Empire?

In one of the inaugural titles of Oxford's new Essentials in Biblical Studies series, Harry O.

Maier considers the multilayered social contexts that shaped the authors and audiences of the New Testament.

Beginning with the cosmos and the gods, Maier presents concentric realms of influence on the new religious movement of Christ-followers.

The next is that of the empire itself and the sway the cult ofthe emperor held over believers of a single deity.

Within the empire, early Christianity developed mostly in cities, the shape of which often influenced the form of belief.

The family stood as the social unit in which daily expression of belief was most clearly on view and, finally, Maier examines the role ofpersonal and individual adherence to the religion in the shaping of the Christian experience in the Roman world.

In all of these various realms, concepts of sacrifice, belief, patronage, poverty, Jewishness, integration into city life, and the social constitution of identity are explored as important facets of early Christianity as a lived religion.

Maier encourages readers to think of early Christianity not simply as an abstract and disconnected set of beliefs and practices, but as made up of a host of social interactions and pluralisms.

Religion thus ceases to exist as a single identity, and actsinstead as a sphere in which myriad identities co-exist.