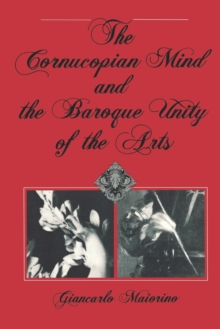 The Cornucopian Mind and the Baroque Unity of the Arts

This comparative and interdisciplinary study focuses on a cluster of epoch-making themes that emerged in the late sixteenth century.

Michelangelo and Giordano Bruno are taken as the founding fathers of the Baroque, and we see that beyond the Alps their lessons were echoed in Montaigne, Cervantes, and the Counter-Reformation culture of the Mediterranean basin.

Maiorino shows that the common denominator that links the origins of the Baroque to its maturity is the concept of form as "process," which is then articulated into chapters on the formative unity of the arts, art forms at the threshold, and the development from humanist perfection to Baroque perfectibility.

Such an evolution in literature and the arts is situated in relation to the age of explorations (Columbus), scientific inventions (the telescope), and the fundamental shift from the enclosed Ptolemic system to the open universe of the Copernican revolution. At the Baroque point of origin, the inner vitality of Michelangelo's emphasis on creation as "process" rather than completed act taught a crucial lesson to Baroque artists.

Their response to the infinite and open universe of the "New Science" was one that took part to be as dynamic and metamorphic as life itself.

It is in the context of "open" forms within an "open" universe that this study moves from Michelangelo to Bruno.

His poetics of immeasurable abundance set "process" at the very core of the Baroque art, thought, and science.

Applied to the forms of art, growth and metamorphosis are linked to what Maiorino calls (borrowing from Mikhail Bakhtin) the Baroque chronotope of formation, which refers to forms responding to the dynamics of space-time interactions.

Such interactions were exhaustive and even tested the boundaries between reality and fiction, creation and denial, conformity and criticism from picaresque Spain to middle-class Holland. And it is the painting of a Dutch artist-Rembrandt's Aristotle Contemplating the Bust of Homer- that is taken as a symbol of the Baroque reconciliation of humanist learning with human or humane understanding.

Such a humanizing attitude also marked the final transformation of humanist ideals of perfection into the Baroque experience of human perfectibility. This book will be of importance to all scholars concerned with the history of ideas, cultural history, and the Baroque in literature and art.