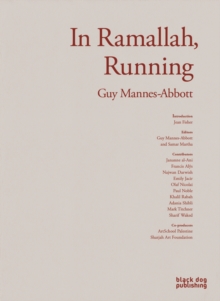 Guy Mannes-Abbott is a writer based in London and this book focuses on his series of texts reciting his time in the city of Ramallah, Palestine.

Published together for the first time, these texts document his surroundings and reveal a glimpse of the city as it has never been seen before. In Ramallah, Running represents a unique encounter with Palestine, interweaving short, poetic, running texts with longer essays describing what Mannes-Abbott encountered during his multiple expeditions within the city.

As a whole it conjures the place as well as the people of Ramallah and the surrounding hills and valleys within the Wall to uniquely penetrating effect.

These lyrical, evocative texts generate a very special intimacy with Palestine, with singular style and accumulatively compelling force. Mourid Barghouti, the great Palestinian poet and author of the classic memoir I Saw Ramallah, describes the texts as; "A cunning simplicity of writing today's Palestine, through the alleys, roads, streets, hills, valleys, days and evenings in and around Ramallah, charged me with love of the art of writing [and] of Palestine.

You showed me my place and made me hear my story. I read it in one breath."